This is a guide to build the Authentic Airliners Caravelle kits, mostly to become aware of how to use the small parts.
It is a Caravelle III, but most of all sections of this build are valid for the other 2 variants available.
I have chosen the early AF livery, as I have seen it very often in the 60ties at Berlin-Tegel and as it is just classic.

I begin with the main landing gear. 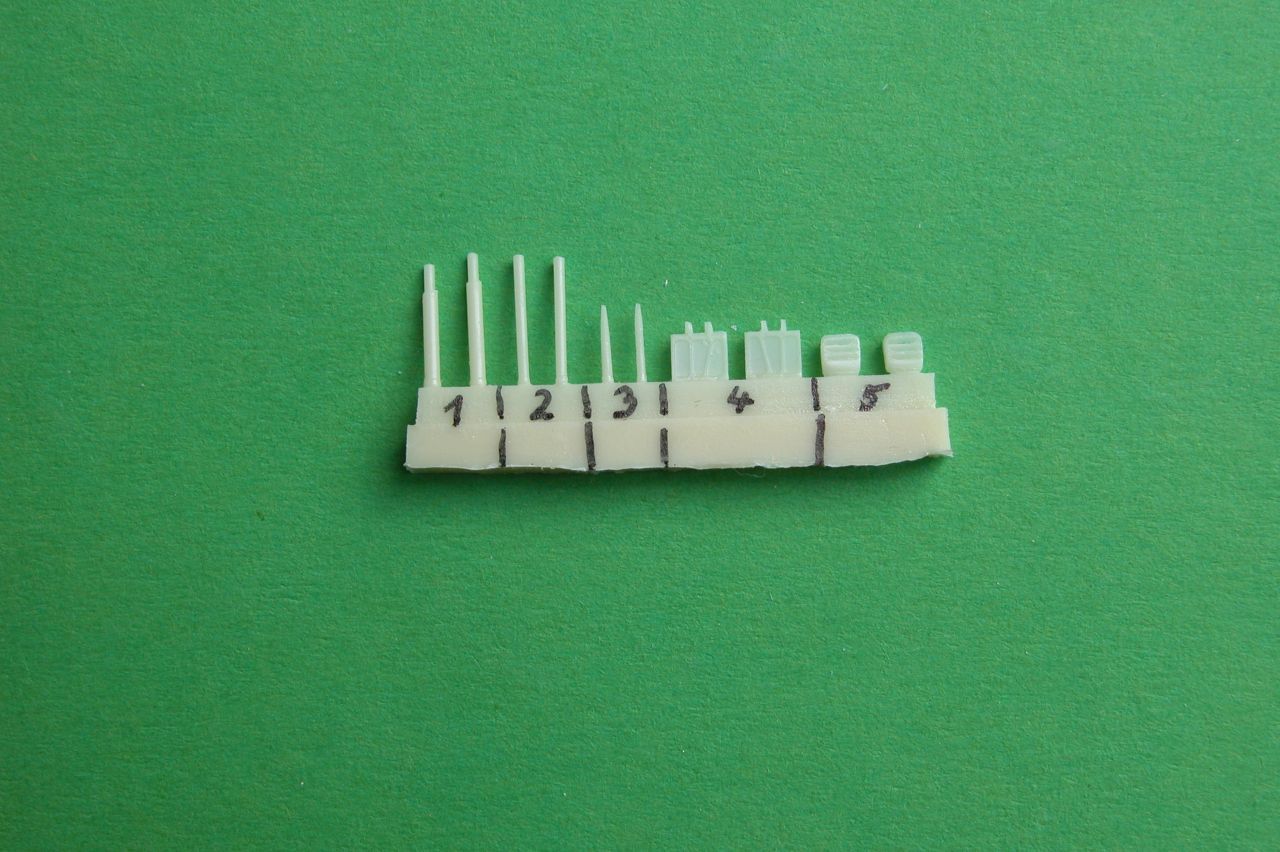 You`ll need to find out first which is left and which is right.

Basically, the main gear struts are angled backwards. Ok, this does not give you any clue for left and right yet.

The main gear struts have 4 small hinges for support struts and main gear door connections. 2 of these hinges are facing forward, one aft and one outboard. Furthermore, the forward bogie is shorter than the aft.

But a pic mostly says more than words. 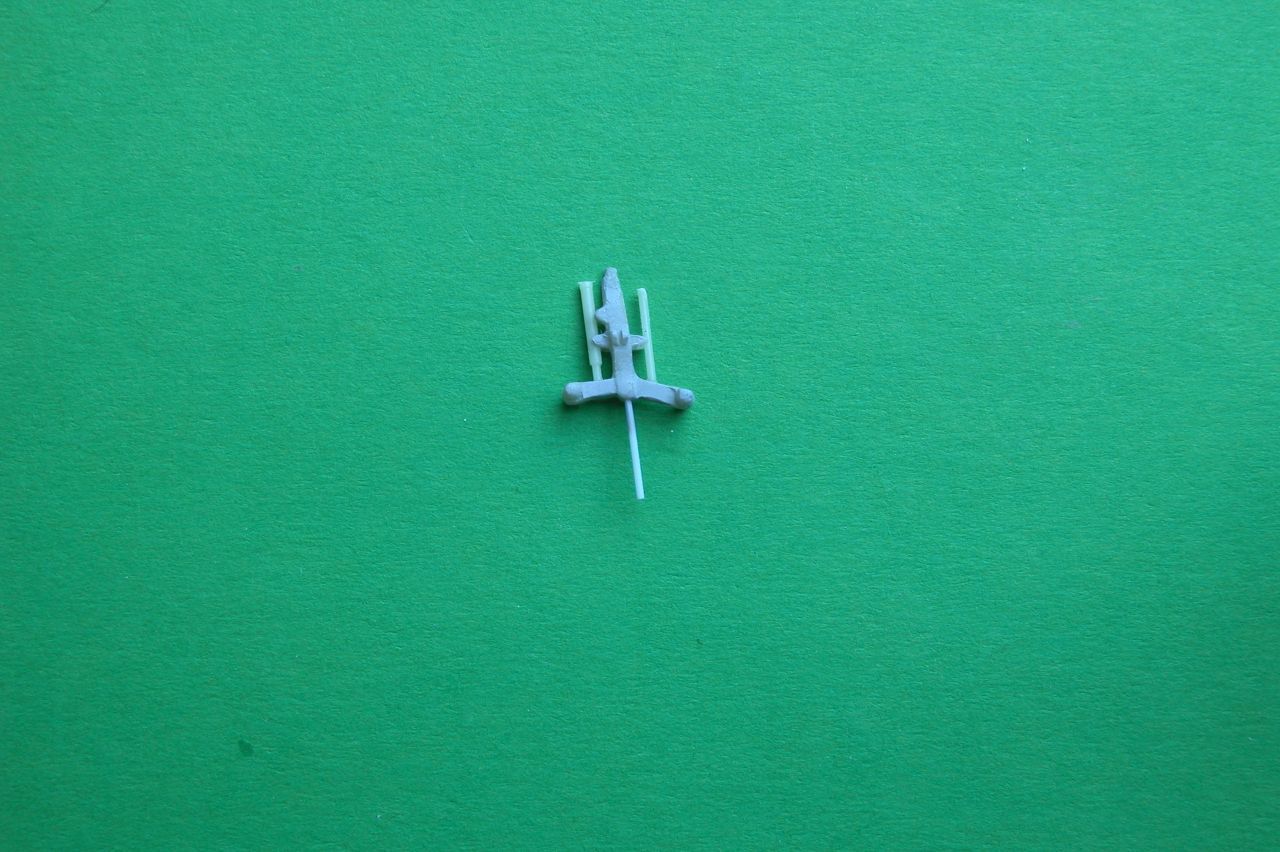 The above pic shows the left main gear.

In the meantime part 1 from the first pic is assembled forward and part 2 aft.

In the meantime, I was preparing the fuselage for the paint job.

As I prefer to re-scribe the panel lines into the final paint ( on all non-metal surfaces ), I have to fill them all before actually starting the paint job. 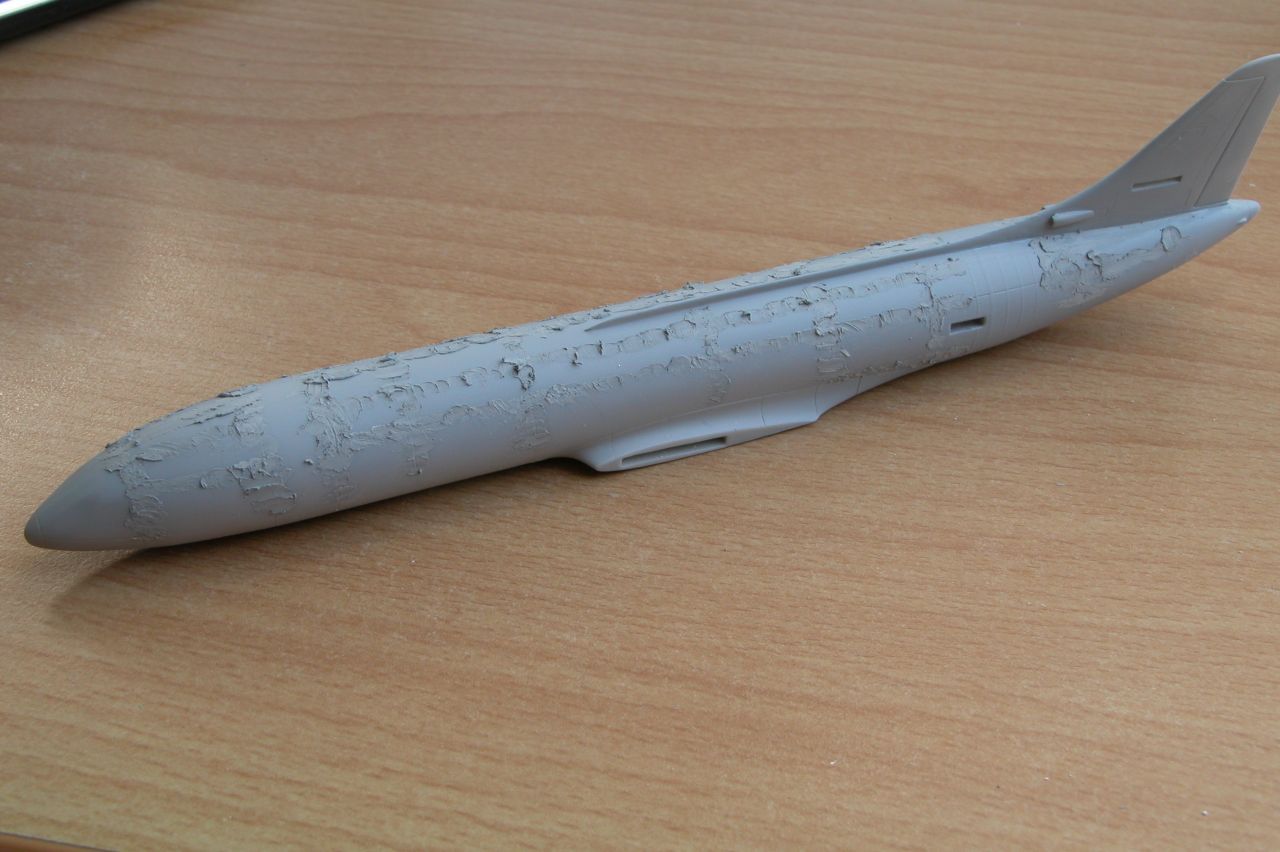 Eventually, I was able to start applying the decals.

The AF decal sheet had been kindly donated by Nick Webb.

I had a hard time though to apply them, as they are not designed for this kit. Each cockpit window was cut out separately from various sources. My brother must jump in here to make a nice fitting decal. ( already under development )

You may notice, that the panel lines are very thin and neat. 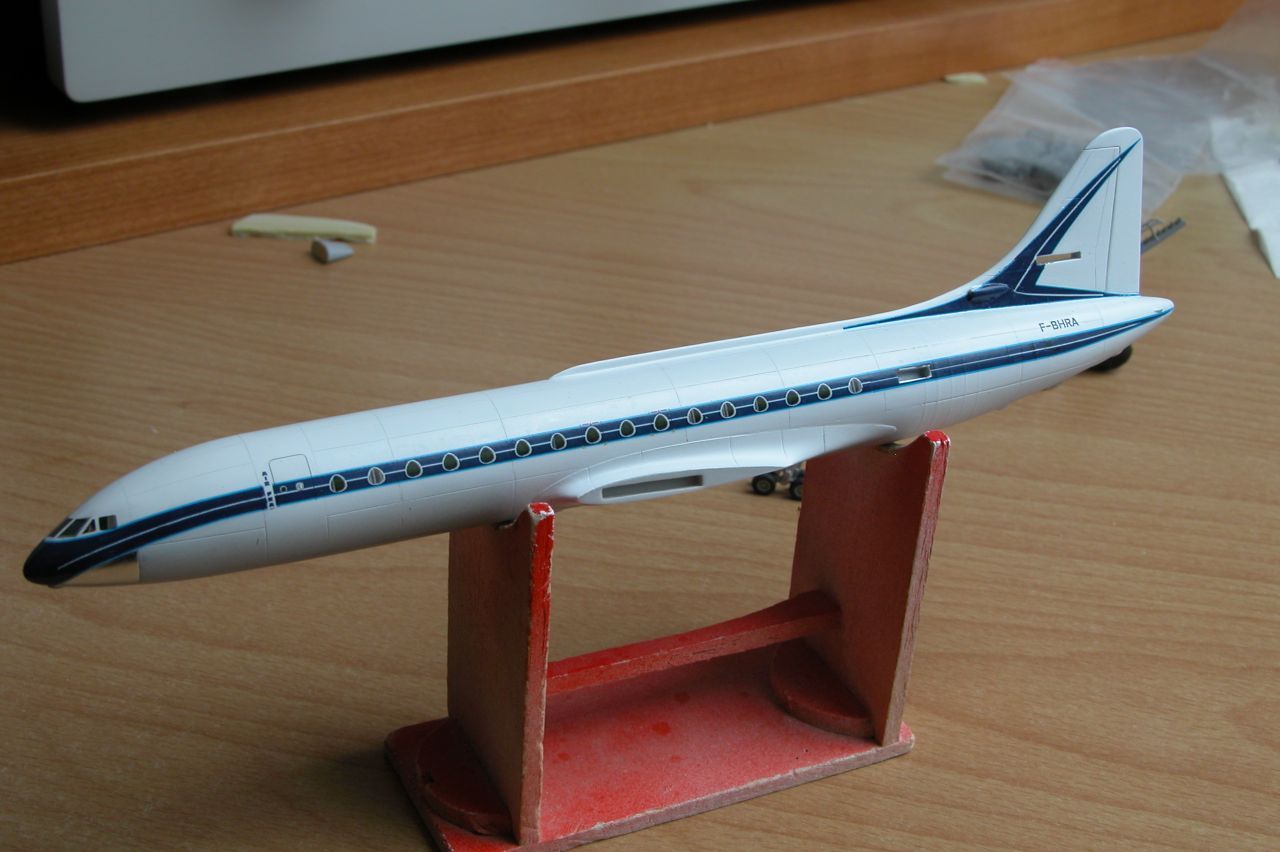 Now the fuselage is almost completed.

I discovered a small problem when assembling the vertical fin.
Due to the shrinking of the fuselage during the molding process, which I did not consider while making the master pattern, the fin needs to be placed a little bit further forward.

You will know what I mean once you`ll build it. To solve it simply cut off about 0,5mm from the fwd part of the fin, as well as from mounting tab. 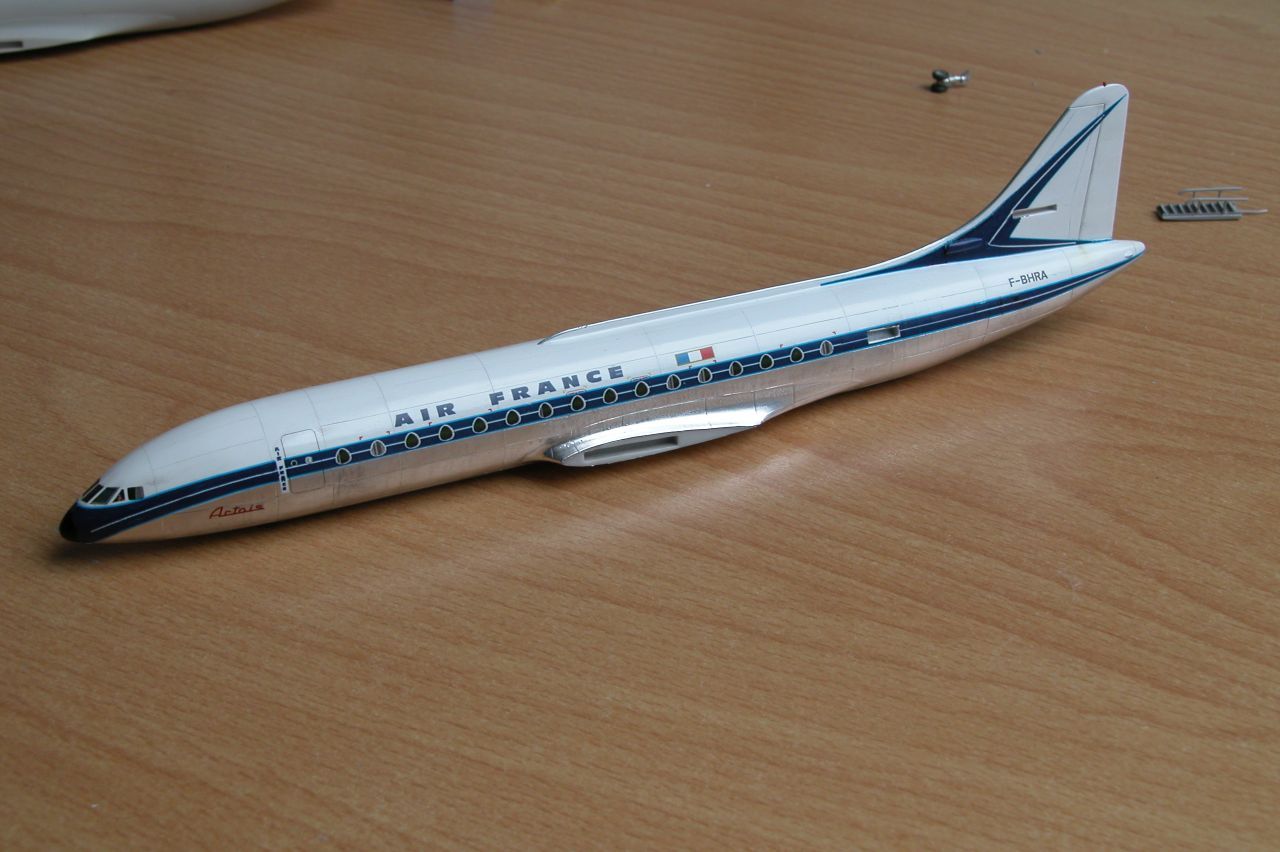 Here now some information about assembly of the nose gear and its doors.

The little triangle on the following sprue is the aft facing torque link, while the other 2 pieces are the hand rails for the aft stair. 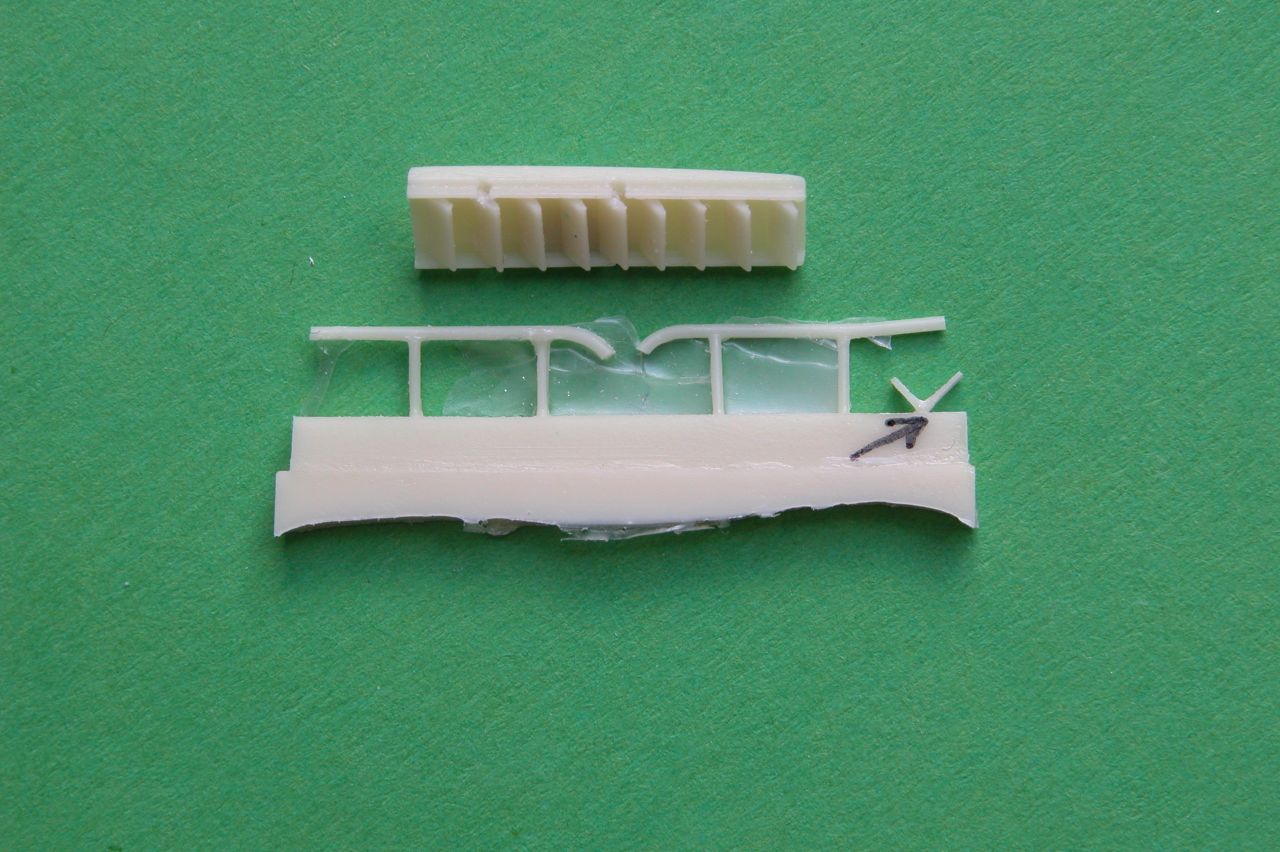 To assemble the side doors, you need to deepen the 4 little holes adjacent to the gear bay. For casting reasons these holes are not deep enough to house the nose gear door hinges. 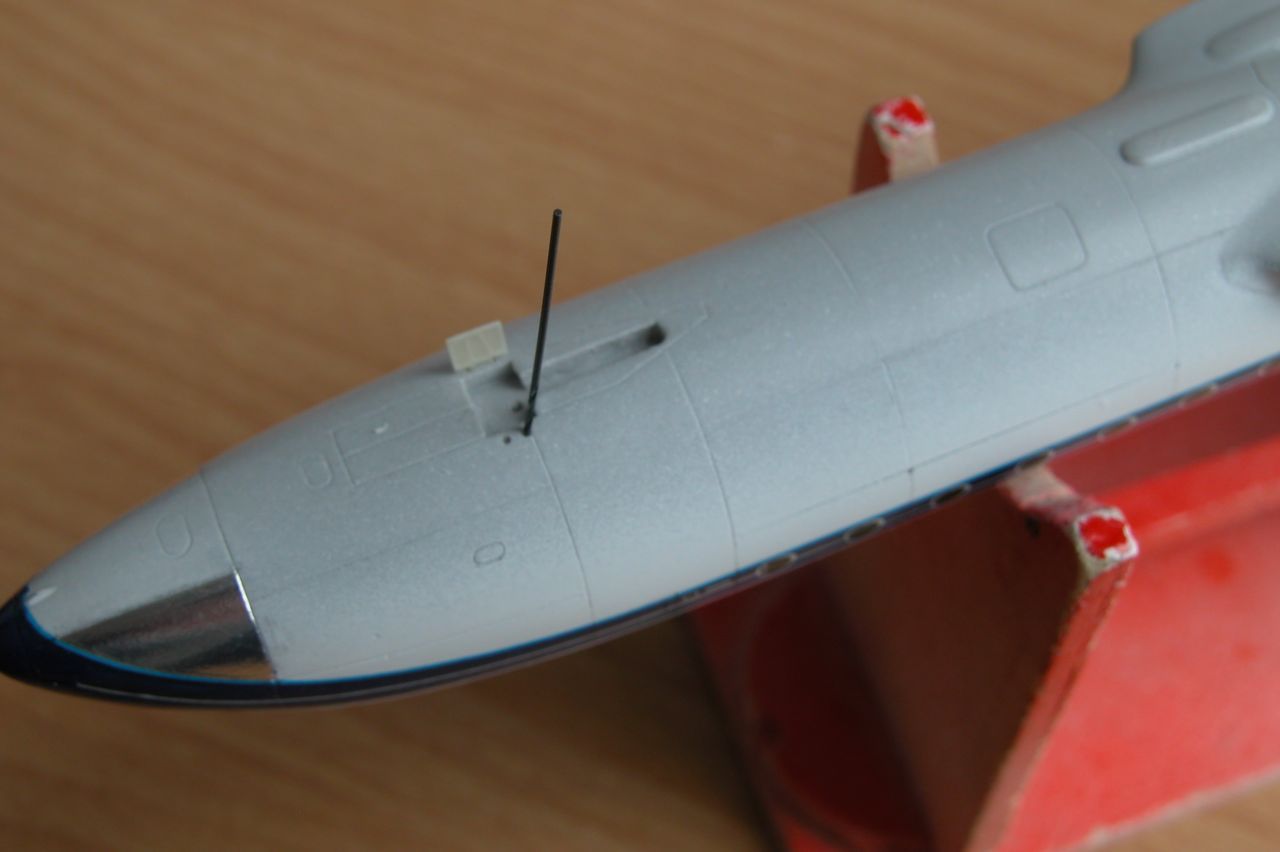 The next sprue contains the remaining gear doors. 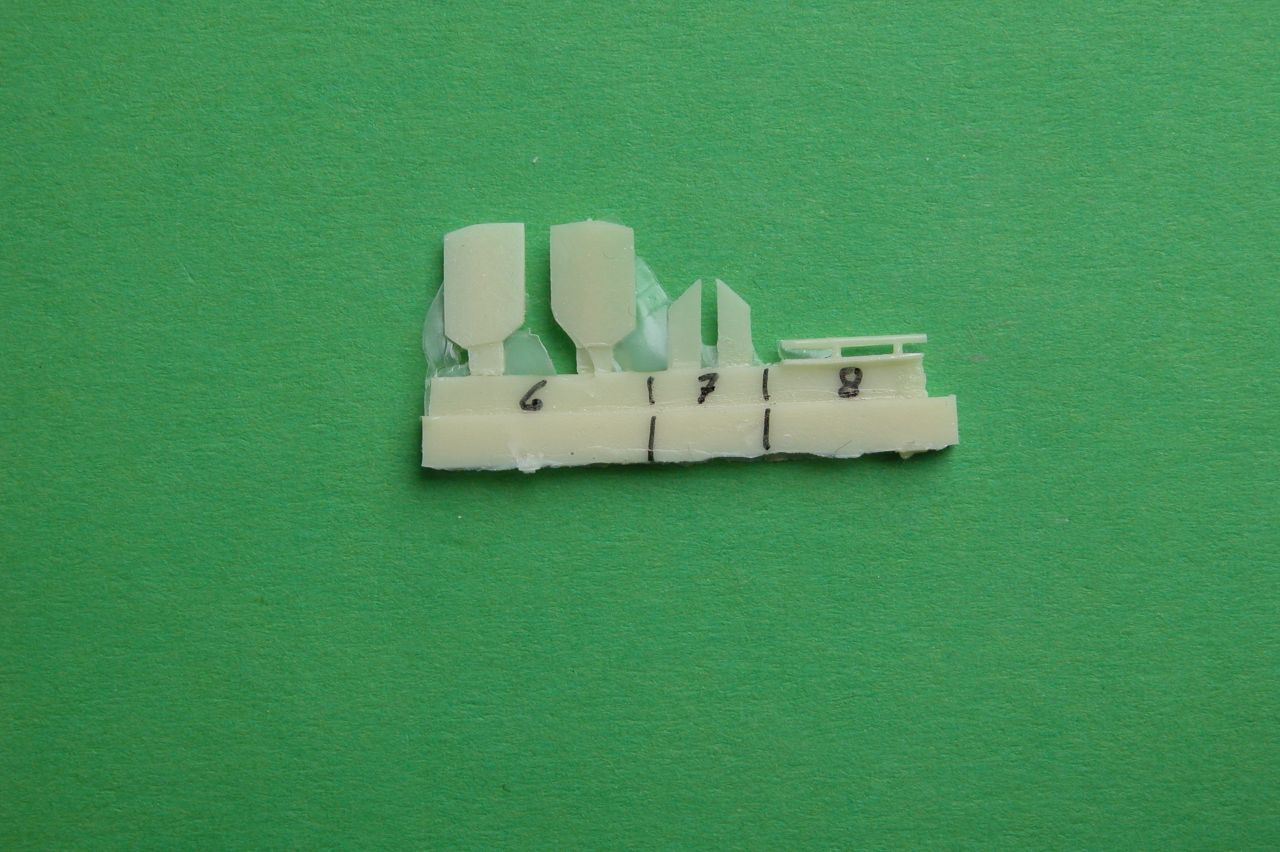 Piece #8 is the aft nose gear door and shall be assembled as follows: 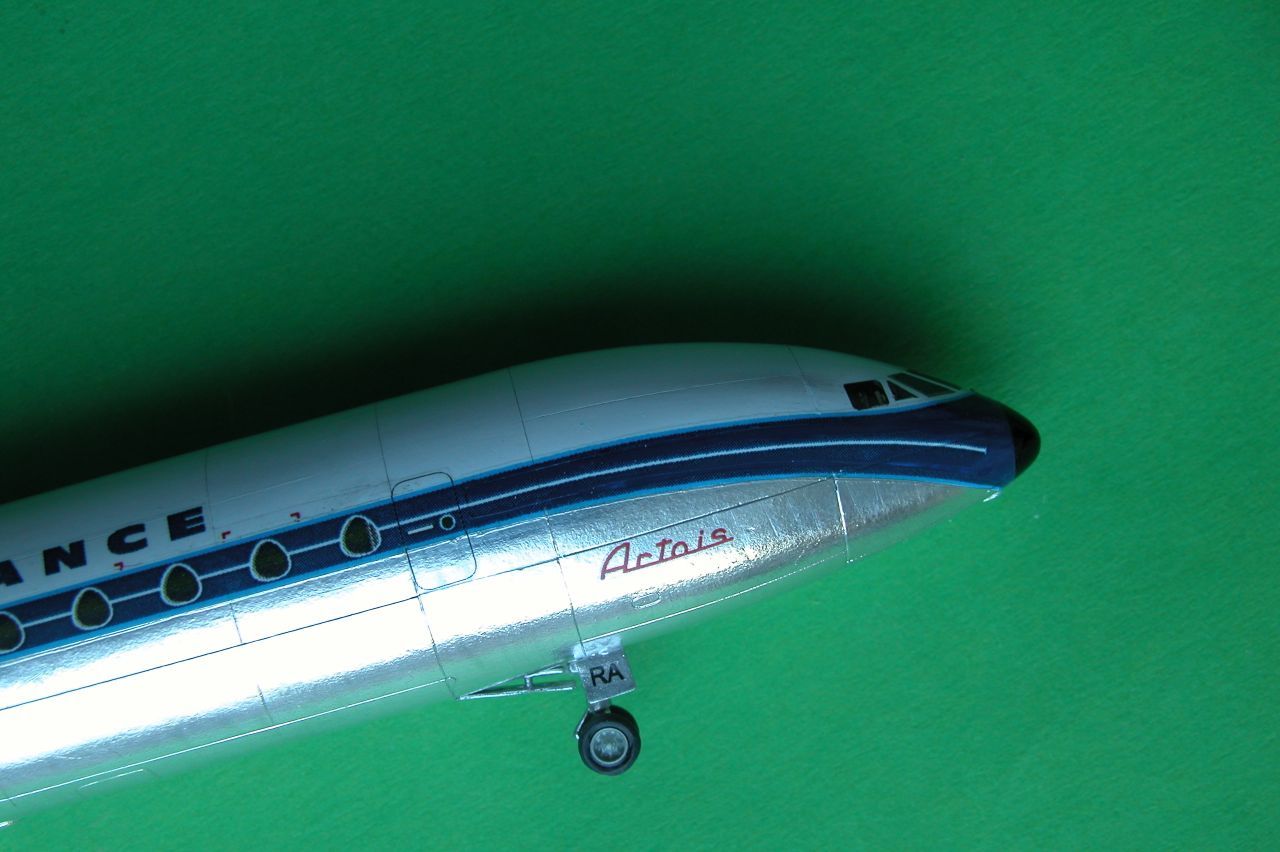 The next pic shows parts 6 and 7 as well as part 3 from the very first picture. 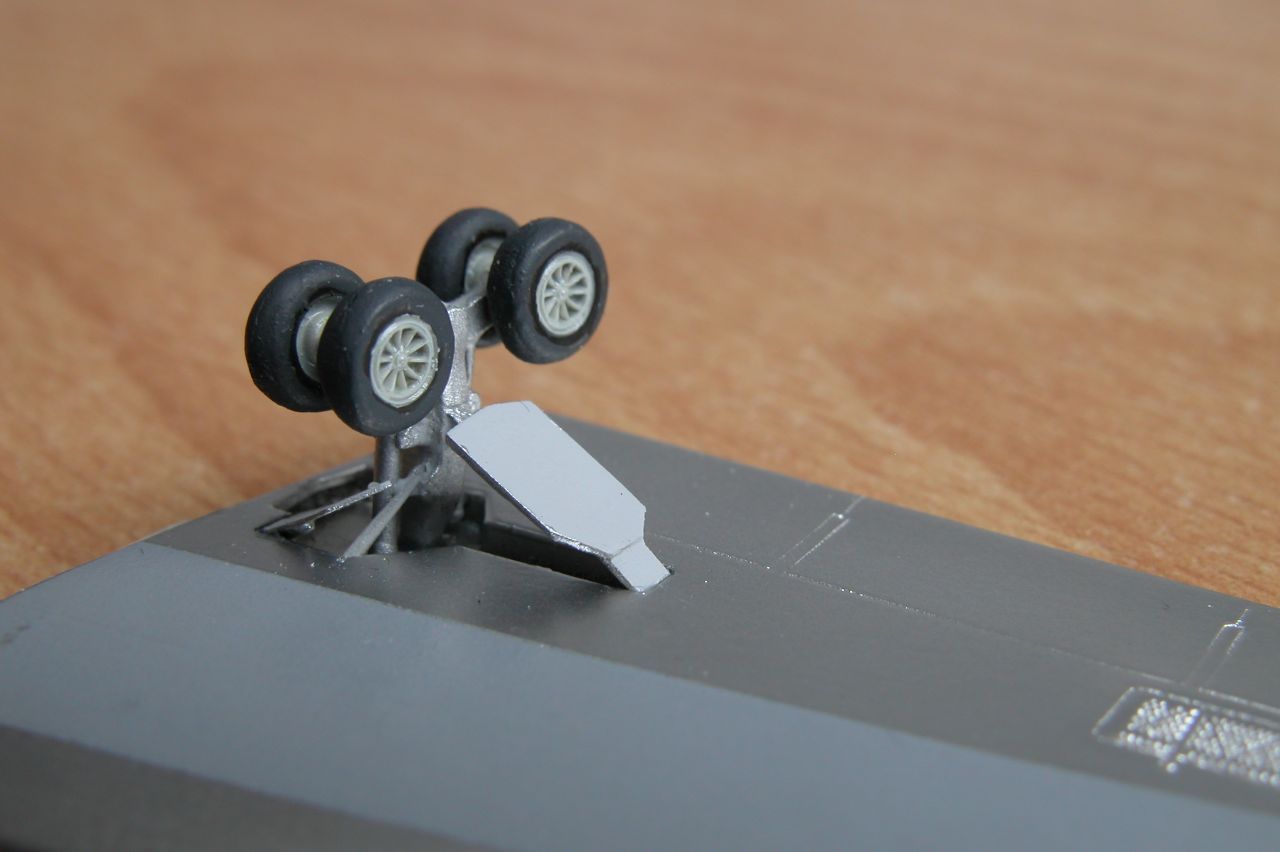 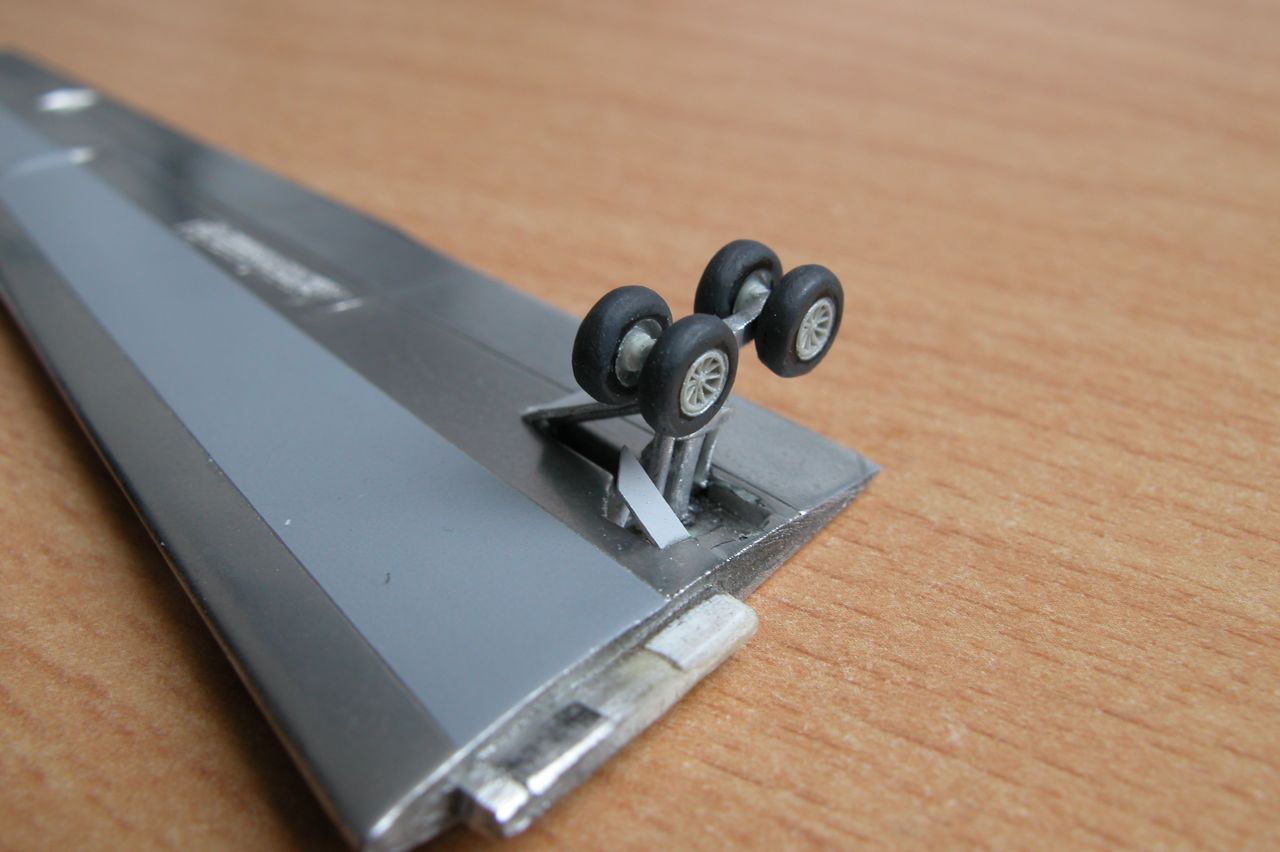 Hopefully, these informations will help you assembling any of the Caravelle kits.